Cycling in the dark provides a different experience than day-time biking. Familiar routes and terrain take on an unfamiliar look while night bike riding.

This can break up the monotony of bicycling on your favorite stomping grounds, and it can provide time to get out and train, which can be difficult with the days getting shorter and when you are pretty busy.

To illuminate the way for you, I want to provide you night bike riding gear, along with cycling safety and visibility — i.e., tips that will keep you from being a hood ornament.

Before you ride your bike outside, you should make sure that your bicycle is in good working order.

Any part that is worn out or could fail, needs to be replaced. You don’t want a part to fail — whether in the daytime or nighttime.

If bicycle mechanics are beyond your scope, a good bicycle shop can help you.

You don’t need to buy the brightest bicycle headlight. A light with about 100 lumens will allow you to be seen, which is OK if you are riding city traffic.

In city traffic, you’ll have streetlights that will allow you to see where you are going.

Good bike lights are inexpensive nowadays. I have used NiteRider products in the past but recently bought an inexpensive light like this. So far, it has worked much better than expected.

If you like riding at night, then you may want to consider upgrading to an official “bicycle headlight” from a company such as NiteRider.

Besides the front bicycle headlight, a light mounted on the top of your helmet can be a real benefit.

A handlebar mounted light turns with your bars. This has limitations, especially when turning. You may look through the turn but your light will be pointed in a different direction than where your vision is.

The best solution is another small bicycle flashlight on your helmet. When your head turns, the light turns as well because it’s fixed to the helmet with Velcro.

You may be able to see where you are going with a cycling headlight, but rear bicycle lights are just as important — if not more important. And a reflector isn’t enough.

A solid red rear bike light on the back of your bicycle provides a marker for cars to see. Drivers can use it as a visual clue about distance and, ultimately, that you are there.

To improve your cycling visibility, a flashing blinkie used in conjunction with the solid red one provides the best solution.

Unless you build your own, buy the best rear bike light on the market you can afford. In the past, I have always used Planet Bike Superflash Blinky and have not upgraded to anything different yet. I don’t see a need to; I really like the Superflash’s performance.

Lights provide the foundation that allows vehicles to see you. However, often the lights illuminate to drivers there’s something there.

It can be difficult for drivers to determine what is actually there, though. This is where reflective gear enters.

Reflective gear, such as an outer shell, makes it easier for drivers to determine that there is a person there.

Although a driver may not be able to see the details, he or she will see a general outline due to the reflective material on the outer wear being placed to provide a general body shape.

You can also get reflective bike tape, which can be added on your frame. This can also help provide visual clues for motorists.

Even with the right equipment, cycling is dangerous. You have no metal that surrounds you and are exposed.

With a few general guidelines, though, you won’t have any problems. First, you should know your local laws and abide by them.

Following the rules of the road is the single most important concept.

Too many bikers ride on the sidewalks, blast through stop signs or red lights, or cycle on the opposite side of traffic rather than with traffic. Each of these actions above is dangerous and illegal.

If you don’t follow the laws, no amount of reflective riding gear will save you from injury.

When cycling in the dark, it can be important to generally assume that motorists can not see you. This will put you on high alert.

For instance, if you come to a intersecting street with a stop sign at the same time as another motorist, you may (wrongly) assume the motorist saw you stop first. That may not be the case. If you assume the motorist didn’t see you and wait, you will avoid a hazard.

These stand-offs can be avoided with a simple precaution: Time your braking so that the other car will reach the sign before you. This will the car to be through the intersecting streets before you come to a full stop. This is the easiest way to avoid confrontation.

Motorists can have a hard time judging distance and the speed of a bicycle rider, especially when coming to a stop.

The motorist will think there’s enough time and distance to cut in front of a cyclist before a stop. To avoid this situation, it’s important to take up the lane.

When you ride in the tire tracks, the motorist will need drive in the other lane to get around you, which is dangerous for them if there’s a stop sign ahead.

They end up in the other lane when cars could be coming at them, and they are going to use extreme caution because they don’t want to damage their car. As a result, they won’t make the pass and tag behind you until the stop sign.

Ride in a straight line. Do not swerve in the lane or swerve between parked cars. This is dangerous because a motorist may not see you in between the cars.

At an intersection, don’t mosey from the road to the crosswalk; this can confuse motorists. They will first they you are behaving like an automobile, then behaving like a pedestrian.

In those instances, you can’t be predicted, which is bad.

Erratic behavior is unpredictable and a motorist will not know how to respond. You can, however, increase your chances of predictability by using hand signals.

Hand signals for turning are generally required by law, and this helps provide predictability.

Weather conditions can have a large impact on your night rides. Visibility in the dark is limited, but when it’s raining, snowing, or foggy you need to take extreme caution because visibility is non-existent.

You also need to be careful of railroad tracks, sand, and salt. If conditions are bad or there’s debris on the roadways, you are better off cycling indoors.

I hope these tips for biking at night make your night bike riding experience so much better. 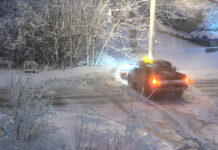 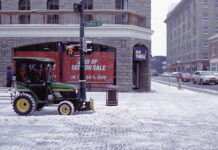 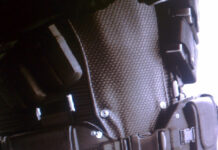