Can they get any more confusing? Nah, they don’t. They are really easy to learn and I want to help you.

The standard electric guitar has six strings. When people refer to the strings casually, they number them one through six.

String # 1 is the thinnest or the smallest gauge. It is called the top string — despite being closest to the floor when you are holding the guitar like you are going to play it.

String #6 is the thickest and is the largest gauge. It is closest to the ceiling when jamming on the guitar

Each string has a note name as well, in relation to their pitch.

Once you can identify a string and pick it, you can play an open note.

Strings are the first half of important things to consider when learning how to play chords.

The other thing to take into consideration is on what frets you should rest your fingers.

Frets are raised bars on the neck of the guitar that stretch all the way down, separating the neck into little sections.

On some guitars, every odd fret is marked with a dot, starting on the third fret.

The dots are there to show useful notes on the fretboard, mostly pointing out notes that are not sharp or flat.

However, the dot on fret 9 denotes a C#.

Many guitar players use these dots to memorize the major milestones on the fretboard and in orientation when remembering chords and where to place their fingers.

Chords are important to playing songs because they are combinations of various finger positions on oftentimes multiple strings.

Important chords to be aware of when playing guitar are G, C, D, and E minor. These chords make their way into a reasonably impressive number of guitar riffs and songs, so they are a great place for beginners to start when it comes to chords.

The G chord is made using both E strings (first and sixth strings), and the A string (considered 5th string on fretboard diagrams).

The numbers refer to which fingers to place on each fret/string combination.

Your first finger (pointer finger) goes on the fifth string (second thickest string on the top) in the second fret.

Your second finger (middle finger) goes on the sixth string (E string on the top with the thickest gauge) in the the third fret.

Finally, your third finger (ring finger) goes on the first string (the skinny E string on the bottom), also in the third fret.

You will strum all the strings at once, making sure that none of your fingers are bent in a way so that they would be muting the sound of any of the strings when you strum.

When playing chords, you’re going to want your fingers to be as close to the frets (those raised ridges) as possible.

You don’t exactly want them on top of the frets, but lying to the side of them, so that they are touching the raised ridge.

On some chords though, it is better to have the fingers angled instead of parallel to the frets, so that it is more comfortable to play.

Also, there are some occasions when one particular finger doesn’t have to be directly next to the fret, in the name of playability. But I will bring up those exceptions when they apply.

The next chord worth mentioning is the C chord. The C chord is made using the second string (B), the fourth string (D), and the fifth string (A).

We’ll encounter the numbered dots again on the diagram for this chord.

You simply put your first finger (pointer) on the B string within the first fret.

Next, you put your second finger (middle) on the D string within the second fret.

Your third finger (ring) goes on the A string within the third fret.

Just like the G chord, you will strum all of the strings of your guitar except for the sixth string (you’ll start on the A string).

Again, make sure that your fingers are not bent or rested on any of the strings so that the sound will not be muted.

But you’ll want your pointer finger to be slightly rested on the sixth string (heavy E) so that it won’t ring out.

A pro-tip for making this chord easier to stretch to: let your fingers lay at an angle pointing in toward your body, instead of parallel to the frets. Make sure your thumb stays tucked in behind the neck though.

Finally, we will discuss how to make the D chord.

To best play this chord, your finger doesn’t need to be as close as possible to the fret.

The best place for your finger would probably about an inch from the fret.

Next, put your second finger (middle) directly below that finger on the first string (the thinnest string) also in the second fret.

Finally, backtrack and put your third finger (ring) on the second string (B) in the third fret.

The third finger will try to work its way closer to the second fret.

You’ll want to practice stretching it so that it is as close to the end of the third fret as possible, so that you’ll eventually be able to keep your third finger in its correct position for this chord. Just keep pushing it forward!

You won’t play the top thickest strings on this chord. You’ll start on the fourth string (D) and strum in a downward direction, and then back up again if you intend to repeat the chord.

This is a chord that is really difficult not to mute, and you will probably struggle for a while with muting when playing this chord. But practice makes perfect! It’s all about stretching your fingers and forcing them to stay in their places.

With these three chords: G, C, and D, you’ll now be able to play a lot of popular songs. Before moving straight to songs though,

I would recommend practicing just these chords (strumming down the chord and then back up again) until you get the hang of them.

Then, you can throw in trying to switch between these chords. Eventually, you’ll be able to play songs like Johnny Cash’s “Ring of Fire”, which alternates between G, C, and D; and “Zombie” by the Cranberries. Bob Dylan’s “Knockin’ on Heaven’s Door” also would be playable with just these chords.

I hope this information about guitar string notes has been helpful. 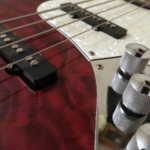 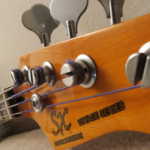 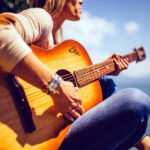