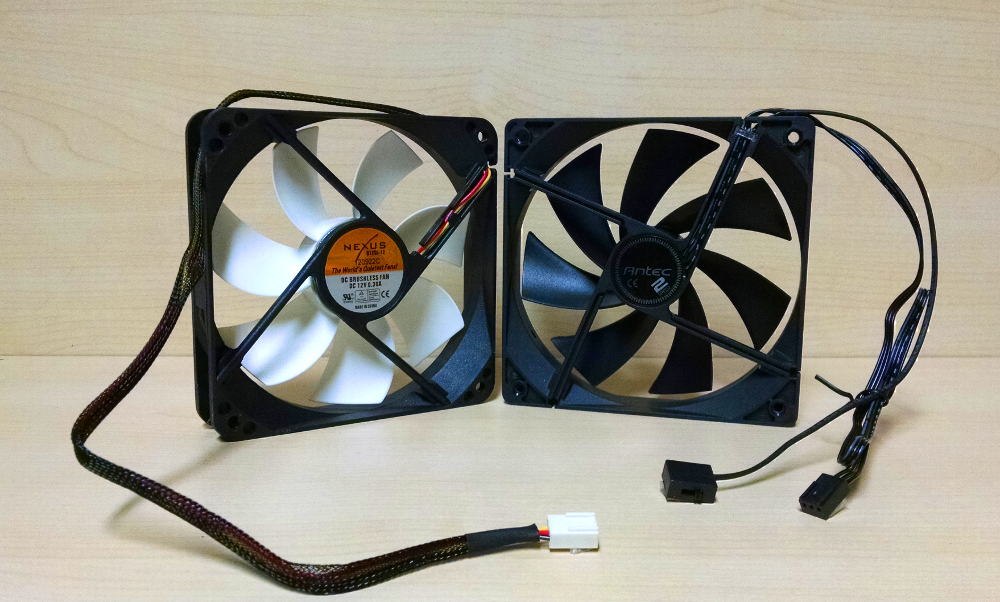 For years, the best computer fans for me were the orange Nexus 120mm units.

I always defined “best” as being able to keep my tower and CPU cool (under 100 percent load at 50 degree Celsius) and provide little to no audible fan noise.

Every PC I built used Nexus — the orange version. They are super quiet, especially when they are under-volted to 7 volts.

But I built a PC a couple months ago, bought the white version, and thought I’d compare them with the computer box fans from Antec that came with the case.

Read customer reviews of the best case fans in 2017 on Amazon.

I used an Antec P280 case, which had three TwoCool 120mm 2 speed case fans, which are designed to be quiet.

It turned out the TwoCools are really quiet on the low setting and don’t require wiring changes to get them at 7 volts.

Although the case had three fans, I only used one for the rear exhaust and put the other two in the parts bin. 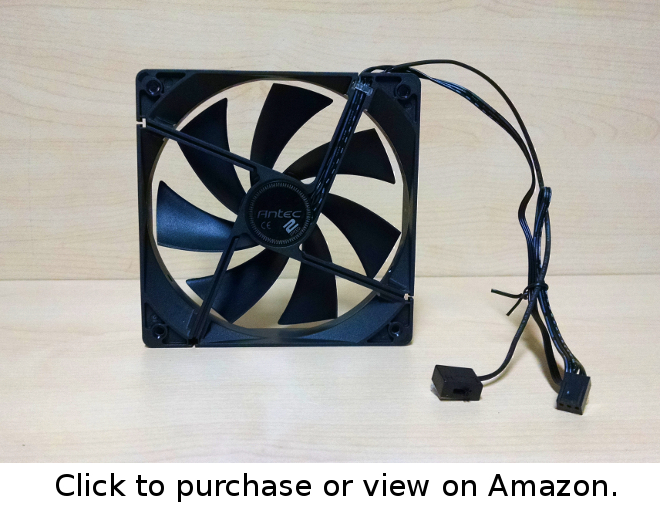 Antec boasts that the TwoCool has a 600 RPM or 1200 RPM speed, which is adjustable to your needs.

The two-speed control uses a 3-pin connector and has a 3-pin to Molex adapter.

It is a true plug and play, with no wiring modifications needed to get the lower RPM and decibel rating.

That’s a nice feature, which makes it easy to get a quiet computer by just replacing the unit. For most other fans, I had to splice into the wiring and re-volt the fan to spin it at a lower RPM. (Nexus is an example.)

Those specs above are for the current models of TwoCools.

When I checked my instructions for the P280 case, my manual noted the fans in my case had a little different ratings.

On low, my fans have an audible clicking noise when I put my ear inches from them. It’s barely audible when the fans are in a case — unless the room is exceptionally quiet at 3 a.m., for instance.

On the high setting, they are quieter than most case fans. 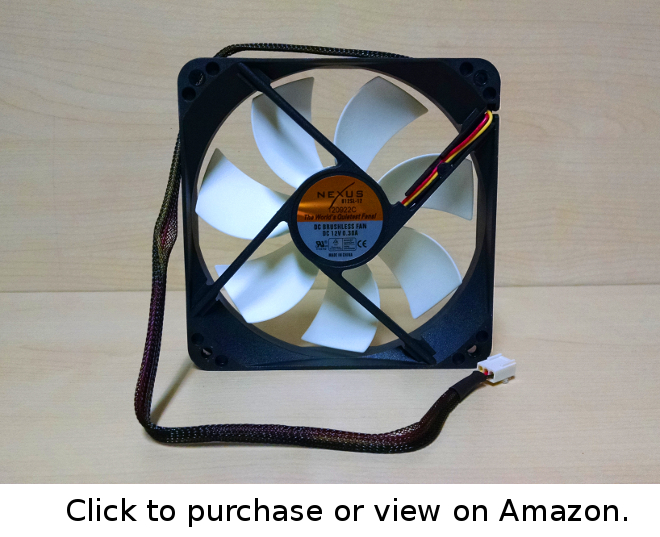 After having PC fans that sounded like hurricanes, it was a relief when I read tests of quiet fans years ago and found out I did not need a PC that was as loud as my vacuum cleaner.

The Nexus 120mm Real Silent Case Fan has always been my go-to unit because it has a low operating RPM at 12 volts.

But the RPMs and decibels can be lowered by lowering the voltage, which is why these are so popular.

According to the Silent PC Reviews article, they found that the Nexus case fan spun at 680 RPMs at 7 volts and produced less than 19 decibels at 1 meter with 19 CFM.

They produce a small whirring noise if you put your ear inches from them. They are quiet, but it’s important to note that their CFM is fairly low, which means you might need one for intake and one for exhaust in the case.

Nexus also provides a 3-pin to molex adapter and silicone fan mounts that lower vibration onto the case. Less case vibration translates into less noise, too. 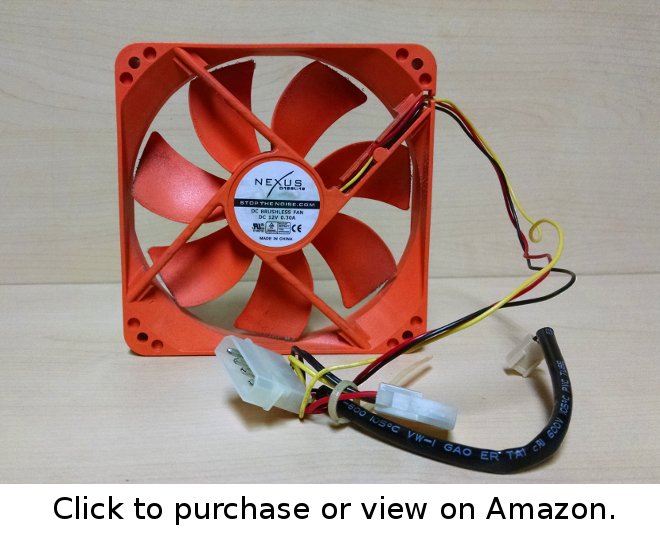 Although the numbers between Nexus and Antec are similar, it’s important to keep in mind that the testing was done by different groups.

That said, I have 5 extra fans — two Antecs and three Nexus fans in my supply. The next few PCs I build will use them.

I like both, will use both, and don’t think there is a real winner — except for the consumer in this case.

But I will say this: Nexus is quieter, I think.

At a stock 12 volt configuration, the Nexus operates a lower RPM and is quieter. (To me, they are both loud in this configuration, and you’ll hear them outside the case if your conditions are quiet.)

At 7 volts, the Nexus is still quieter, as well. I could put my head 8 inches away from the fan and hear it making a slight whirring sound. The same was true about Antec fan but it appeared to be louder at that distance.

The benefit for me with the Antec was the two-way switch. I did not have to tweak the wiring to slow the RPM down and get it quieter.

Call me lazy but it makes it super easy to get a quiet PC. And, in my mind, there’s no reason not to get one because nothing is worse than listening to a good set of bookshelf speakers and trying to drown out that noisy fan with more volume.

How to under-volt a CPU fan (the easy way)

There’s a couple ways to adjust the voltage on a fan.

The easiest way is to own a motherboard that has 4 pin fan connectors, which use pulse-width modulation — a way to control fan speed with software on your motherboard.

Another method is to buy a fan controller. 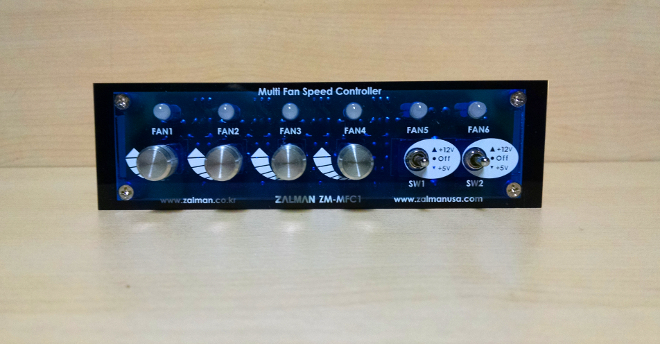 The controller has a molex connector that mates to the power supply.

It then has a series of three pin connectors, which your fans can connect to, and has a rotary control which allows the voltage to be varied because of resistors.

Newer units are digital. Mine is not.

You could get a soldering iron out and start splicing and hard-wiring stuff together, but that’s not a good idea and is not easy — just time wasted, if you ask me.

Tips for buying the best cooling fans for PCs

The smaller the size of the fan, the more noise it will make. Fans come in all sizes, from 40mm to 160+ mm.

It’s important to get a fan that fits your case.

Noise is a big factor. Normally, a louder fan does not mean a “better” fan; it just means it’s loud.

A good case fan is designed well, cools your case well, and has enough cubic feet per minute of air flow to cool your case properly.

Also, it may be beneficial to get a good CPU thermal paste, which may help keep your CPU cooler.

Fans range in decibels, from less than 18 db to leaf blower loud!

They may also have lights or be different colored.

Finally, fans come with a 3 or 4 pin connector, which connects to the motherboard, or a molex connector which attaches to the power supply unit.

Find the best computer fans in 2023 on Amazon. 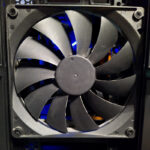 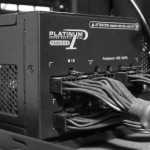 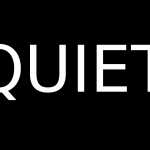 What are the best earplugs for studying? (ANSWERED)